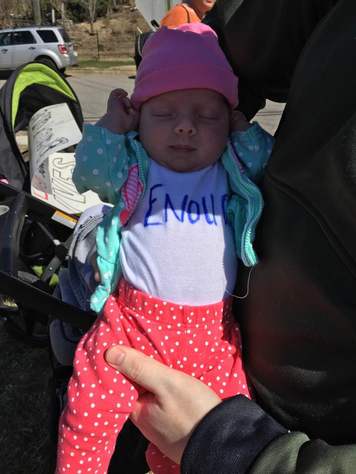 Youngest Protester at March For Our Lives: Fredericksburg 3/24/18 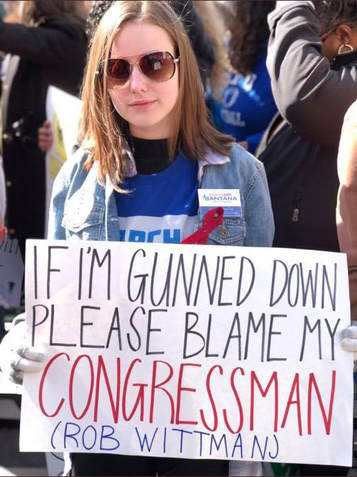 This protester calls out Congressman Wittman for taking NRA money and supporting the NRA agenda that values guns more than kids. 3/24/18 (This photo may have been taken at the DC March For Our Lives event.)
ACTION OPPORTUNITY 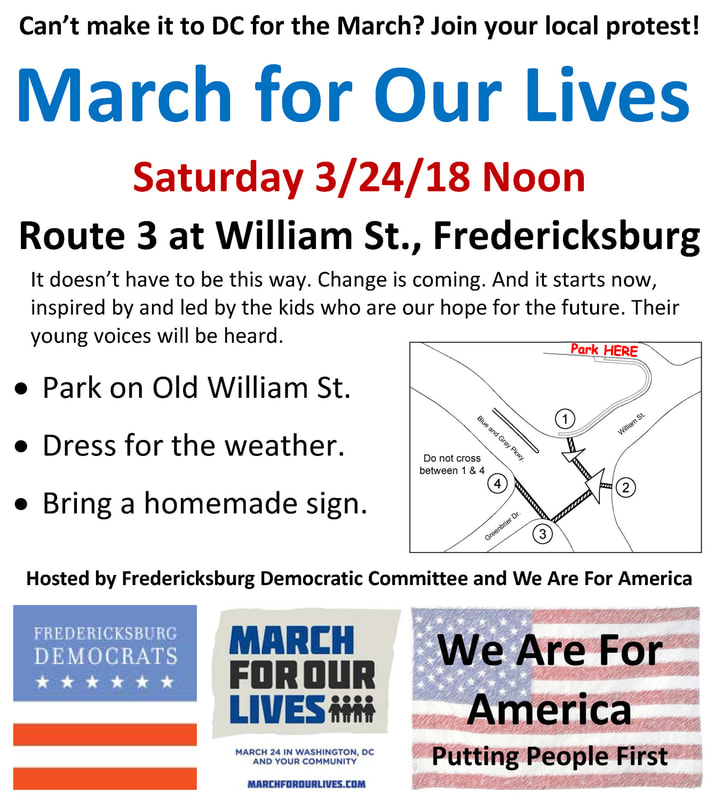 PRESS RELEASE – MARCH FOR OUR LIVES – FREDERICKSBURG, WE ARE FOR AMERICA (WAFA) AND FREDERICKSBURG DEMOCRATIC COMMITTEE (updated 3/16/2018)

On March 24, the kids and families of March For Our Lives will take to the streets of Washington DC to demand that their lives and safety become a priority and that we end gun violence and mass shootings in our schools today. We Are For America and Fredericksburg Democratic Committee have teamed up to host one of the 764“sibling” demonstrations, here in Fredericksburg at the corner of Blue and Gray Highway (Route 3) and William Street in Fredericksburg on March 24th at 12:00 PM. (Parking on Old William Street.) Voter registration will be available, sponsored by Stafford Democratic Committee.

The event can be found on the official event website. As of 3/16/18, 46 people had signed up to attend.
https://event.marchforourlives.com/event/march-our-lives-events/9952/signup/?source=&akid=&zip=

About March For Our Lives
Not one more. We cannot allow one more child to be shot at school. We cannot allow one more teacher to make a choice to jump in front of a firing assault rifle to save the lives of students. We cannot allow one more family to wait for a call or text that never comes. Our schools are unsafe. Our children and teachers are dying. We must make it our top priority to save these lives.
March For Our Lives is created by, inspired by, and led by students across the country who will no longer risk their lives waiting for someone else to take action to stop the epidemic of mass school shootings that has become all too familiar. In the tragic wake of the seventeen lives brutally cut short in Florida, politicians are telling us that now is not the time to talk about guns.  March For Our Lives believes the time is now.
On March 24, the kids and families of March For Our Lives will take to the streets of Washington, DC to demand that their lives and safety become a priority. The collective voices of the March For Our Lives movement will be heard.
School safety is not a political issue. There cannot be two sides to doing everything in our power to ensure the lives and futures of children who are at risk of dying when they should be learning, playing, and growing.  The mission and focus of March For Our Lives is to demand that a comprehensive and effective bill be immediately brought before Congress to address these gun issues.  No special interest group, no political agenda is more critical than timely passage of legislation to effectively address the gun violence issues that are rampant in our country.
Every kid in this country now goes to school wondering if this day might be their last. We live in fear.
It doesn’t have to be this way. Change is coming. And it starts now, inspired by and led by the kids who are our hope for the future. Their young voices will be heard.
Stand with us on March 24. Refuse to allow one more needless death.

About We Are For America
We Are For America (WAFA) is a non-partisan and inclusive group that stands up for American values and resists any agenda that does not put people first. We are based in Fredericksburg area of Virginia.

About Fredericksburg Democratic Committee
Website: http://fredericksburgdems.org/
Facebook: facebook.com/fredericksburgdemocrats/
Twitter: @FXBGDems
Background
We Are For America supports common sense gun legislation.
The National Rifle Association (NRA) blocks common sense gun legislation.
Reducing the power of the NRA is WAFA's recommended focus of direct action.
​WAFA recommends boycotting Amazon until it drops NRA TV.
​Look further down the page for:
Consumer Action
The easiest focus is Amazon. You can access NRA TV for free on Amazon. Check this link for evidence.
​Don't just boycott Amazon - TELL THEM and TELL YOUR FRIENDS.
To communicate with Amazon, you can use the on-line chat function.
Sample of Amazon Chat
Sheryl: Hi, my name is Sheryl.
Thank you for being a Prime member.
Me: I love my prime account
Sheryl:I’m sorry that you’re having issue on placing your order. I'd be happy to look into this for you and see what we can do.
Me: I find that it makes me ill to order from Amazon while you continue to broadcast NRA TV.
So I cannot order the puzzle books and household supplies in my cart.
I have come to depend on Amazon. It is really a hassle NOT ordering from Amazon. Please tell me that AMAZON is going to drop NRA TV.
Sheryl: Thanks for your feedback. I've passed your message on to the appropriate department in our company for consideration. We value this kind of feedback, as it helps us continue to improve our store and provide better service to our customers.
I've forwarded this to the correct team internally.
Me: I sure hope Amazon starts being pro-child instead of pro-NRA so I can order that stuff. I've reactivated my Barnes and Noble account and will order my next puzzle magazines from them if I do not hear from you soon.
Sheryl: I totally understand. I appreciate your patience, cooperation and understanding in this matter. It is our privilege to have you as our valued customer & we want to make sure you are always taken care of.
Me: I'm feeling kind of sick to my stomach thinking about those children in Florida . . . and Sandy Hook . . . and right here in Virginia at Virginia Tech . . . okay that's enough Amazon for one day. Thank you for your response.
Organizations boycotting the NRA as of 3/4/18http://www.newsweek.com/nra-boycott-full-list-companies-have-cut-ties-gun-lobby-over-florida-shooting-819050
Organizations NOT YET boycotting the NRA or NRATV as of 3/4/18​http://time.com/money/5176783/nra-boycott-fedex-amazon-apple-gun-control-youtube/
FedEx - Organizations dropping FedEx over NRA boycotthttps://thinkprogress.org/companies-cutting-fedex-ties-nra-de00e028b85c/
What is the NRA?
The National Rifle Association (NRA) is the lobbying arm of the gun industry. The NRA takes in money from a variety of sources, from credulous hunters, to the makers of militarized weapons, to Russian agents. The NRA donates to politicians (almost exclusively Republicans) to influence them to vote against even gun control legislation that is extremely popular with all groups, even members of the NRA.

From Democracy Now 1/16/13
Behind the NRA's Money: Gun Lobby Deepens Financial Ties to $12 Billion Firearms Industry
​by Amy Goodman, Nermeen Haikh, and Peter Stone
"Throughout its history, the National Rifle Association has portrayed itself as an advocate for individual gun owners’ Second Amendment rights. But a new investigation finds the group has come to rely on the support of the $12-billion-a-year gun industry — made up of firearms and ammunition manufacturers and sellers. Since 2005, the NRA has collected as much as $38.9 million from dozens of gun industry giants, including Beretta USA; Glock; and Sturm, Ruger & Co., according to a 2011 study by the Violence Policy Center."
https://www.democracynow.org/2013/1/16/behind_the_nras_money_gun_lobby

from McClatchy News 1/23/18
FBI investigating whether Russian money went to NRA to help Trump
by Peter Stone and Greg Gordon
"WASHINGTON - The FBI is investigating whether a top Russian banker with ties to the Kremlin illegally funneled money to the National Rifle Association to help Donald Trump win the presidency, two sources familiar with the matter have told McClatchy.
FBI counterintelligence investigators have focused on the activities of Alexander Torshin, the deputy governor of Russia’s central bank who is known for his close relationships with both Russian President Vladimir Putin and the NRA, the sources said.
It is illegal to use foreign money to influence federal elections."
http://www.mcclatchydc.com/news/nation-world/national/article195231139.html

from NPR 3/1/18
Depth Of Russian Politician's Cultivation Of NRA Ties Revealed
by Alina Selyukh and Audrey McNamara
"A prominent Kremlin-linked Russian politician has methodically cultivated ties with leaders of the National Rifle Association and documented efforts in real time over six years to leverage those connections and gain deeper access into American politics, NPR has learned."
https://www.npr.org/2018/03/01/590076949/depth-of-russian-politicians-cultivation-of-nra-ties-revealed

from Salon 3/2/18
NRA causes Trump to reverse his gun stances
by Matthew Rozsa
"Trump has now backpedaled on the gun control ideas he seemed to advocate earlier in the week — because of the NRA
For the second time in a week, President Donald Trump has backed away from gun control measures he initially supported after meeting with influential members of the NRA."
https://www.salon.com/2018/03/02/nra-causes-trump-to-reverse-his-gun-stances/

from Politico 2/28/18
Gun control support surges in polls
"Roughly 2 in 3 Americans now say gun control laws should be made more strict in the wake of the murder of 17 people at Marjory Stoneman Douglas High School, according to a number of polls, including a new POLITICO/Morning Consult poll that shows support for stricter gun laws among registered voters at 68 percent, compared with just 25 percent who oppose stricter gun laws.
"Republican support for tougher gun laws is at its highest point since Morning Consult and POLITICO began tracking the issue," said Dropp. "In this week's poll, 53 percent of Republicans indicated they supported stricter gun laws, compared to 37 percent [of Republicans] who said the same following the Pulse nightclub shooting in June 2016.”
https://www.politico.com/story/2018/02/28/gun-control-polling-parkland-430099

from Politifact Wisconsin 3/18/15
Lena Taylor: Most NRA members back background checks on all gun purchasesby Tom Kertscher
An article published in the New England Journal of Medicine on a poll done in January 2013 by two entities at Johns Hopkins University -- the Department of Health Policy and Management and the Center for Gun Policy and Research.\ found that 74 percent 3.7 percent) of NRA members supported requiring background checks for all gun sales. A CBS News/New York Times poll, also from January 2013, found that background checks on all potential gun buyers were favored by 85 percent of NRA households. And a February 2013 poll by the Pew Research Center for the People and the Press found that 74 percent of people in NRA households favored making private gun sales and sales at gun shows subject to background checks.
​http://www.politifact.com/wisconsin/statements/2015/mar/18/lena-taylor/most-nra-members-back-background-checks-all-gun-pu/
What is NRA TV?
​Links to two articles about NRA TV: 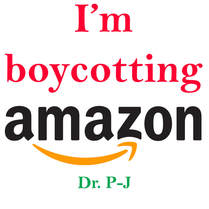