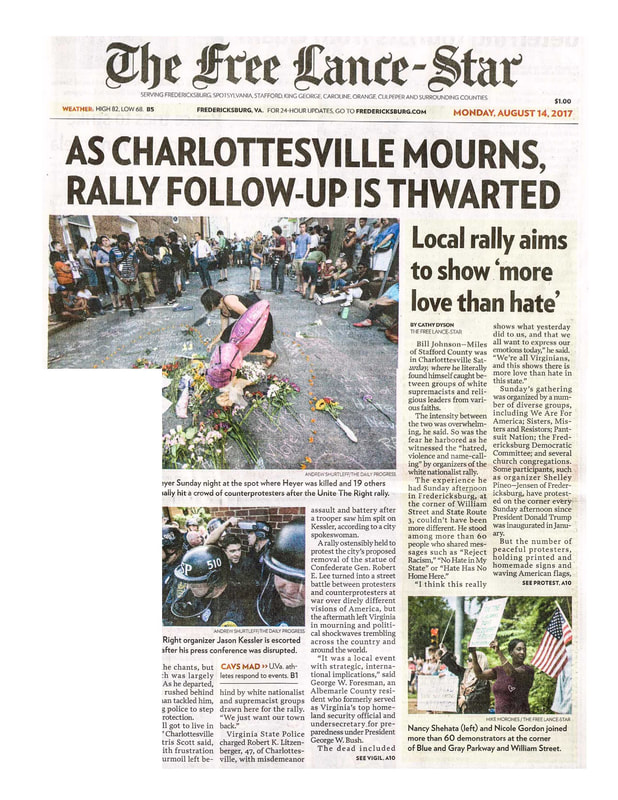 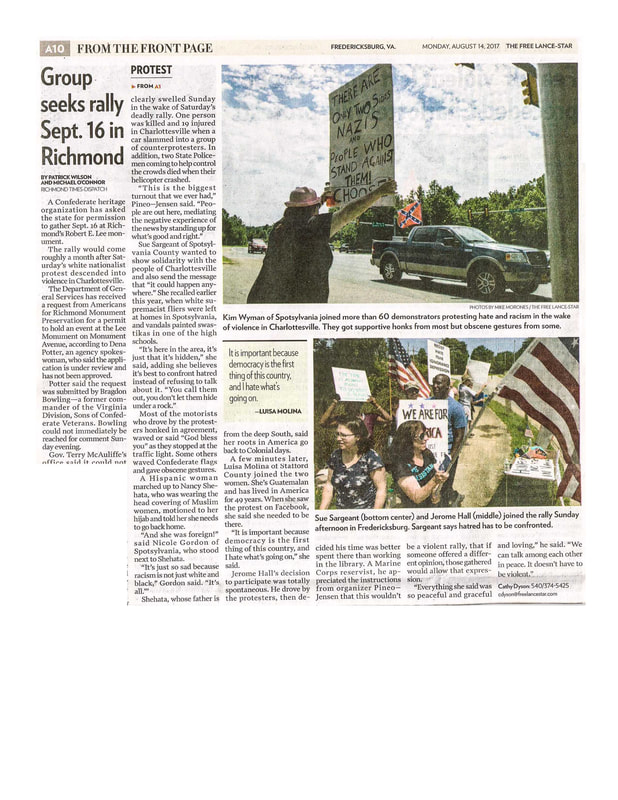 EDITOR'S PICK FEATUREDFredericksburg-area protesters aim to show 'there is more love than hate in this state'
By CATHY DYSON THE FREE LANCE–STAR
Bill Johnson–Miles of Stafford County was in Charlotttesville Saturday, where he literally found himself caught between groups of white supremacists and religious leaders from various faiths.
The intensity between the two was overwhelming, he said. So was the fear he harbored as he witnessed the “hatred, violence and name-calling” by organizers of the white nationalist rally.
The experience he had Sunday afternoon in Fredericksburg, at the corner of William Street and State Route 3, couldn’t have been more different. He stood among more than 60 people who shared messages such as “Reject Racism,” “No Hate in My State” or “Hate Has No Home Here.”
“I think this really shows what yesterday did to us, and that we all want to express our emotions today,” he said. “We’re all Virginians, and this shows there is more love than hate in this state.”
Sunday’s gathering was organized by a number of diverse groups, including We Are For America; Sisters, Misters and Resistors; Pantsuit Nation; the Fredericksburg Democratic Committee; and several church congregations. Some participants, such as organizer Shelley Pineo–Jensen of Fredericksburg, have protested on the corner every Sunday afternoon since President Donald Trump was inaugurated in January.
But the number of peaceful protesters, holding printed and homemade signs and waving American flags, clearly swelled Sunday in the wake of Saturday’s deadly rally. One person was killed and 19 injured in Charlottesville when a car slammed into a group of counterprotesters. In addition, two State Policemen coming to help control the crowds died when their helicopter crashed.
“This is the biggest turnout that we ever had,” Pineo–Jensen said. “People are out here, mediating the negative experience of the news by standing up for what’s good and right.”
Sue Sargeant of Spotsylvania County wanted to show solidarity with the people of Charlottesville and also send the message that “it could happen anywhere.” She recalled earlier this year, when white supremacist fliers were left at homes in Spotsylvania, and vandals painted swastikas in one of the high schools.
“It’s here in the area, it’s just that it’s hidden,” she said, adding she believes it’s best to confront hatred instead of refusing to talk about it. “You call them out, you don’t let them hide under a rock.”
Most of the motorists who drove by the protesters honked in agreement, waved or said “God bless you” as they stopped at the traffic light. Some others waved Confederate flags and gave obscene gestures.
A Hispanic woman marched up to Nancy Shehata, who was wearing the head covering of Muslim women, motioned to her hijab and told her she needs to go back home.
“And she was foreign!” said Nicole Gordon of Spotsylvania, who stood next to Shehata.

“It’s just so sad because racism is not just white and black,” Gordon said. “It’s all.”’
Shehata, whose father is from the deep South, said her roots in America go back to Colonial days.
A few minutes later, Luisa Molina of Stafford County joined the two women. She’s Guatemalan and has lived in America for 49 years. When she saw the protest on Facebook, she said she needed to be there.
“It is important because democracy is the first thing of this country, and I hate what’s going on,” she said.
Jerome Hall’s decision to participate was totally spontaneous. He drove by the protesters, then decided his time was better spent there than working in the library. A Marine Corps reservist, he appreciated the instructions from organizer Pineo–Jensen that this wouldn’t be a violent rally, that if someone offered a different opinion, those gathered would allow that expression.
“Everything she said was so peaceful and graceful and loving,” he said. “We can talk among each other in peace. It doesn’t have to be violent.”
Cathy Dyson: 540/374-5425 cdyson@freelancestar.com